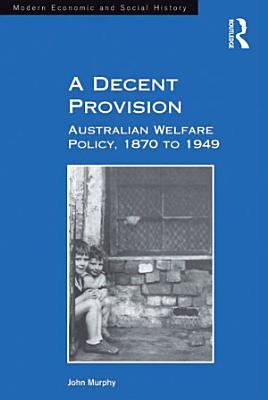 A Decent Provision is a narrative history of how and why Australia built a distinctive welfare regime in the period from the 1870s to 1949. At the beginning of this period, the Australian colonies were belligerently insisting they must not have a Poor Law, yet had reproduced many of the systems of charitable provision in Britain. By the start of the twentieth century, a combination of extended suffrage, basic wage regulation and the aged pension had led to a reputation as a 'social laboratory'. And yet half a century later, Australia was a 'welfare laggard' and the Labor Party's welfare state of the mid-1940s was a relatively modest and parsimonious construction. Models of welfare based on social insurance had been vigorously rejected, and the Australian system continued on a path of highly residual, targeted welfare payments. The book explains this curious and halting trajectory, showing how choices made in earlier decades constrained what could be done, and what could be imagined. Based on extensive new research from a variety of primary sources it makes a significant contribution to general historical debates, as well as to the field of comparative social policy.

Authors: John Murphy
Categories: History
A Decent Provision is a narrative history of how and why Australia built a distinctive welfare regime in the period from the 1870s to 1949. At the beginning of

Outlines of Chronology, Ancient and Modern

Authors: Tom Sorell Ltd
Categories: Philosophy
This volume is an exploration of the ethical issues raised by health insurance, which is particularly timely in the light of recent advances in medical research

Authors: John Young (minister of the Gospel at Hawick, in Scotland.)
Categories: