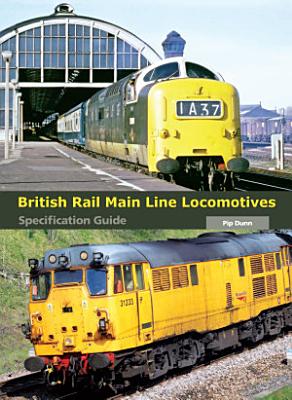 British Rail Main Line Locomotives Specification Guide identifies the major detail differences and livery variations that have appeared on all British Rail, ex-British Rail and privatized railway diesel and electric main line classes from 14 to 92. The book provides a record of the main specifications of each class of locomotive, and details of variations, including: numbers, liveries, headcodes, headlights, wheel arrangements and bogies, brakes, names and - where appropriate - details of refurbishment programmes.Diesel locomotives are a relative newcomer to the railway enthusiast and modelling scenes, and this book brings together information on detail changes in a coherent reference form for the first time, illustrated with photographs of major changes. A useful resource for modellers and those with an interest in the differences that have occurred to the British Rail fleet. Superbly illustrated with around 300 colour photographs.

Authors: Pip Dunn
Categories: Transportation
The first of the English Electric Type 1 design, what we now know as the Class 20s, appeared in June 1957. With their distinctive 'chopper' engine sound, these

Authors: David Cable
Categories: Transportation
The genesis of 25kv overhead electrification began in the late 1960s on the West Coast Main Line, the 1980s for the East Anglian Main Line, and the East Coast M

Authors: Stuart Black
Categories: History
Since the 1800s locomotives have steamed, chugged and sparked their way into the nation's affections. These powerful engines were the drivers of the Industrial

A Bibliography of British Railway History

An Illustrated Guide to Modern Trains

The Encyclopedia of Trains and Locomotives