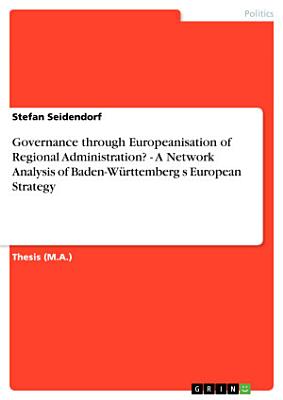 Thesis (M.A.) from the year 2001 in the subject Politics - International Politics - Topic: European Union, grade: 17/20, excellent, College of Europe (Department of Politics), 59 entries in the bibliography, language: English, abstract: Abstract This paper investigates on the regions in Europe. It focuses on the role of the Brussels Office and takes an empirical approach via two case studies. The first chapter deals with theoretical considerations. The nature and definition of "policy-networks" are introduced by the models of Rhodes and Marsh. The importance of dependency of the different networking actors on each other is illustrated. To assess an actor within the network, one has to understand the extent to which he can control and mobilize resources. However, limits of this approach (concentration on participants, not on influence) are shown. Secondly, the implications of globalisation and europeanisation for the regions are shown. The new complexity makes the region deal directly with the European level. Within this multi-level-governance, the mobilisation of regional resources is crucial. Civil society plays an important part. The question if these changes towards europeanisation of the administration are "new governance" is raised. The limits of this concept are assessed. When governance means steering processes rather than controlling territory, this may well occur in networks. The question nevertheless of the legitimacy of these networks remains. Thirdly, the role of the Regional Office is presented with the historic reasons for its establishment and the evolution of its role. A distinction between the "Early-Warning-Function" and the "Platform-Function", is made. The first case concerns the gathering of information on Commission proposals and the way to deal with these informations. The project of a regional European human resources strategy is evoked. In building up a "Euro-pool", the region creates the necessary human resources to send experts into the Commission as well as having the opportunity to "take Europe home". To be present as a state actor on the European scene, the region needs a platform provided by the regional office. One promising way is the added value of transnational interest-coalitions. Accordingly, the two case studies belong one to the field of Early Warning, another one to the region as a European actor. With consideration of the project of Beate Kohler-Koch, the specific features of the "Baden-Württemberg-Network" are presented and two appropriate cases defined. [...]