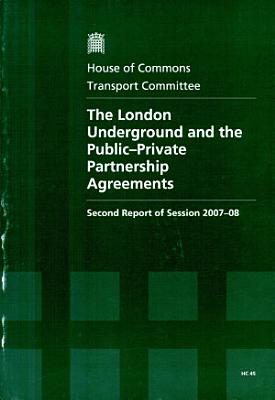 This report from the Transport Committee, examines London Underground and the Public-Private Partnership Agreements. The Government originally announced proposals for modernising the London Underground network system via Public-Private Partnership (PPP) agreements in 1998. Three contracts were drawn up with: (i) Tube Lines for the maintenance and renewal of the Jubilee, Piccadilly and Northern Lines; (ii) with Metronet Rail BVC for the maintenance and renewal of the Bakerloo, Central, Victoria & Waterloo & City Lines; (iii) with Metronet Rail SSL, responsible for the maintenance and renewal of the "sub-surface lines": the Circle, District, Hammersmith & City, Metropolitan & East London Lines. These PPP Agreements, 30 years in duration, were arrangements to maintain, renew and upgrade parts of London Underground by private sector infrastructure companies (Infracos), whilst London Underground is responsible for services to customers. The PPP Agreements also set out a performance-related incentive and penalty scheme to remunerate the Infracos for the improvements they make to the network. In May 2007, Metronet admitted an overspend of £1 billion and was refused access to loan facilities by the banks. It then made a reference to the PPP Arbiter, which in turn triggered an Extraordinary Review (which occurs when extra costs are incurred above the level allowed for the bid). Metronet put in a bid for £551m but the PPP Arbiter provisionally concluded that a sum of £121m was appropriate. Metronet subsequently went into administration on 18 July 2007. The report sets out a number of conclusions and recommendations, including: contracts that were supposed to deliver 35 station upgrades, in fact delivered only 14, 40% of the requirement; stations that were supposed to cost Metronet SSL £2m, cost £7.5m, with only 65% of schedule track renewal accomplished; the Committee criticises the consequences of the imposition of PPP on Transport for London, as a "lamentable state of affairs", with the future of most of London Underground's upgrade and maintenance work in doubt; the Committee states, that the Government should remember the failure of Metronet before it considers entering similar arrangements; that the Government should publish a candid analysis of the events preceding Metronet's collapse and its consequences; the Committee believe that the PPP model was flawed and probably inferior to traditional public-sector management; that the Government needs to prioritise transparency and clarity to taxpayers and ensure that any future contracts result in clear accountability.

The London Underground and the public-private partnership agreements

Authors: Oliver Green
Categories: Transportation
It is impossible to imagine London without the Tube: the beating heart of the city, the Underground shuttles over a billion passengers each year below its busy

Authors: Julie Murray
Categories:
Readers will learn interesting and historical facts about the Tube that operates in and around London, England, like when it began operation and how it is used

A Photographic Journey Through the London Underground

Authors: Elke Rollmann
Categories: Photography
WHAT IS THERE TO SEE? That was the question the authors of this book, Elke and Niko Rollman, heard all the time when explaining their photographic project. The

Authors: Ben Pedroche
Categories: History
Used extensively and somewhat taken for granted by millions of commuters and tourists every day, the London Underground has long been a part of our national her

Authors: Geoff Platt
Categories: True Crime
The story is now thirty years old and most, if not all, of the characters involved were middle aged men at the time and are now dead. The story did make the nat