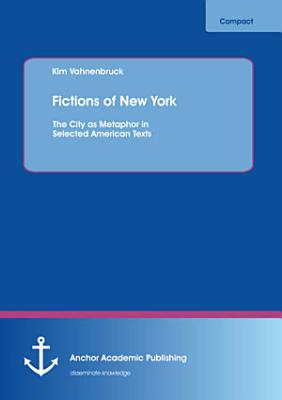 ‘New York City as Metaphor in Selected American Texts’ tries to capture the picture and meaning of an ever-changing city which has casted and still casts a spell over people all around the world. An uncountable number of authors have dedicated their works to New York City because of their fascination of its diversity and constant change that promises its dwellers a life in wealth and freedom. Surprisingly, all novels that have been analyzed reveal New York as the complete opposite of the American Dream that everyone expects when arriving on Ellis Island. The protagonists have to realize that their dreams will never become fulfilled and, consequently, become disillusioned and corrupted by their unhealthy environment. John Dos Passos describes a City that becomes a modern Babylon; it is fragmented and on its way to greed, capitalism and corruption. The New York of Stephen Crane’s Maggie Johnson and Edith Wharton’s Lily Bart is like a gigantic deterministic cage that denies every attempt of escape. Moreover, the metaphysical novel ‘City of Glass’ by Paul Auster does not show any sign of the promised life in wealth and freedom, but rather a city that is split into pieces, ruled by chance and misunderstandings. The city literally dehumanizes its inhabitants as they are dazzled by its addictive quality.