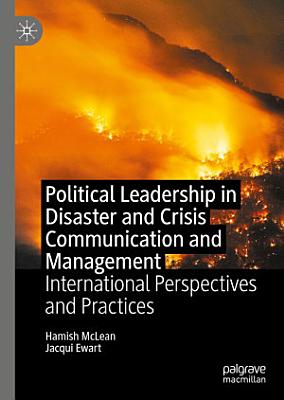 This book explores the role of elected leaders in disaster management. Filling a significant gap in disaster literature, the authors take a pragmatic approach to the relationships between the public under threat, the operational response, and the interests and actions of elected officials. Key tactics are explored, from the ways operational managers strategically deal with unreasonable political demands to what disaster officials argue is the responsibility of elected officials at all levels of government - that is, to ensure vital life-saving information reaches the people who need it most. The book draws on case studies such as the mismanagement of public perceptions by President George W. Bush during Hurricane Katrina in the United States and the widely acclaimed, heartfelt messages delivered by Queensland Premier Anna Bligh during the 2010-11 South-East Queensland floods in Australia. Drawing on a series of interviews with senior disaster managers in ten countries, this book is highly relevant for students, scholars and practitioners interested in disaster communication.

Political Leadership in Disaster and Crisis Communication and Management

The Politics of Crisis Management

Managing the Human Dimension of Disasters

Authors: Kjell Brataas
Categories: Political Science
Managing the Human Dimension of Disasters provides the most comprehensive and up-to-date analysis on how individuals cope with tragedy and loss. Kjell Brataas g

The Handbook of Public Sector Communication

The Routledge Companion to Journalism Ethics

Authors: Urbano Fra.Paleo
Categories: Technology & Engineering
This book explores the common language of politics, ecology and risk, and crosses their conceptual divides. It seeks to shed light on the underlying structural