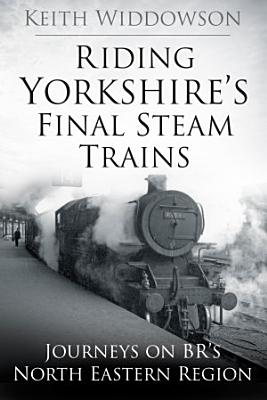 Keith Widdowson visited the North Eastern Region of British Railways on over forty occasions during the final eighteen months of steam powered passenger services. With the odd exceptions (usually for railtours) most of the locomotives were neglected, run down, filthy, prone to failure and often only kept their wheels turning courtesy of the skills of the crew coaxing them along with loving care. Far from the scenic delights so often justifiably portrayed of the Yorkshire countryside, the ever-dwindling numbers became corralled within the industrialized heartland of Bradford, Leeds, Wakefield and Normanton. Here, Widdowson recalls that bygone era, leading an almost nomadic nocturnal existence on his self-imposed “mission” of stalking the endangered “Iron Horses” in one of their final habitats. He was often far from alone in his quest. The “Haulage-bashing” fraternity comprised of like-minded enthusiasts from throughout Britain, often congregated, lemming like, on the one-coach early morning mail trains, the Summer Saturday holidaymaker trains or the Bradford portions; indeed any passenger service with a steam locomotive at its front From the many disappointments of thwarted possibilities to the euphoric joy of unexpected catches, together with over 130 contemporary images, Riding Yorkshire's Final Steam Trains is a compelling snapshot of the race against time at the end of the golden age of steam.

Authors: Keith Widdowson
Categories: Transportation
In mid-1964, Keith Widdowson got wind that the Western Region was hell-bent on being the first to eliminate the steam locomotive on its tracks by December 1965.

Religion and Society in a Cotswold Vale

Authors: Albion M. Urdank
Categories:
During the English Industrial Revolution, the Vale of Nailsworth was a rural-industrial settlement and a center of evangelical Nonconformity. Why did the transi

Authors: Michael A. Vanns
Categories: Transportation
This fantastic guide traces the history of, arguably, the most popular heritage railway in Britain from the origins of the line in the 1830s through the good, b

Authors: Keith Widdowson
Categories: Transportation
In May 1967, Scotland became the third of the six British Railways regions to dispense with the steam locomotive, bringing an iconic era of Britain’s transpor