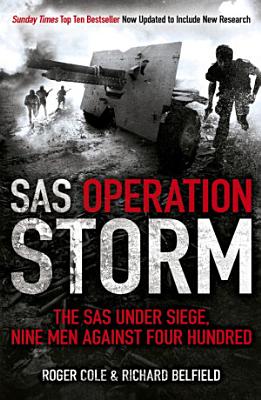 OPERATION STORM is the inside story - told by those who took part - of the greatest secret war in SAS history. The tipping point, Mirbat, South Oman, 19 July 1972 is one of the least-known yet most crucial battles of modern times. If the SAS had been defeated at Mirbat, the Russian and Chinese plan for a communist foothold in the Middle East would have succeeded, with catastrophic consequences for the oil-hungry West. OPERATION STORM is a page-turning account of courage and resilience. Mirbat was a battle fought and won by nine SAS soldiers and a similar number of brave local people - some as young as ten years old - outnumbered by at least twenty-five to one. Roger Cole, one of the SAS soldiers who took part, and writer Richard Belfield have interviewed every SAS survivor who fought in the battle from the beginning to the end - the first time every single one of them has revealed their experience. OPERATION STORM is a classic story of bravery against impossible odds, minute by minute, bullet by bullet.

Authors: Roger Cole
Categories: History
OPERATION STORM is the inside story - told by those who took part - of the greatest secret war in SAS history. The tipping point, Mirbat, South Oman, 19 July 19

Authors: Roger Cole
Categories: Oman
SAS Operation Storm is the inside story of the greatest secret war in SAS history, told by those who took part in it. The tipping point, Mirbat, South Oman, 19

Authors: Tony Jeapes
Categories: History
In 1970 the SAS was called in to support the Sultan of Oman's armed forces in their fierce campaign against a Communist armed insurrection. This is the gripping

Authors: Rowland White
Categories: History
____________________ ‘As vivid and compelling as the best adventure thriller, and a fitting tribute to a small band of men who became heroes’ ANDY MCNAB ‘

Authors: Tony Shaw
Categories: Biography & Autobiography
Many aspire to serve with the Special Air Service, arguably the world’s most prestigious regiment, but few achieve their aim. In this inspiring memoir the aut